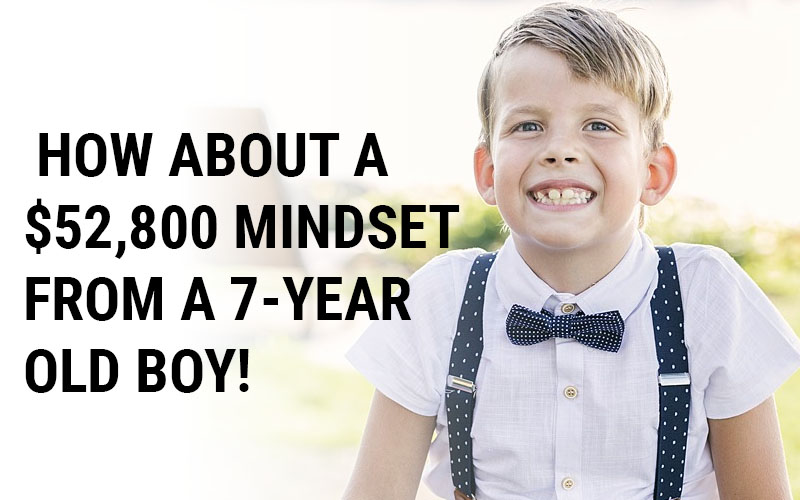 Want to hear about an incredible mindset? How about a $52,800 mindset from a 7-year old!

Want to hear about an incredible mindset? How about a $52,800 mindset from a 7-year old!

I want to tell you about Noah because this little guy, who will soon be 8 years old, is an example to follow for anyone with a dream! You’ll see, there are tons of lessons to learn! Oh, and by the way, Noah is my nephew and I am rather proud of him! 😊

Since Noah was a little boy, he’s had 3 passions: chopping wood, making fire, and eating!

Last summer, he spent most of his time chopping wood in the forest.

After summer, he thought chopping wood with a small wood saw wasn’t ideal. So, he started saving his money to buy a power saw. A 7-year old with a power saw? You’d be right to think he’s a bit young for that and Mommy was indeed afraid!

His mom – my sister Caroline – talked about it with a friend that chops wood himself and he recommended Noah holds it off a little, to Noah’s great despair! Oh, the tears he shed… That was his dream! Plus, he had the money to buy it.

During winter, Noah and his mom befriended the owner of the land behind their home, a charming man named Mathieu (what a beautiful name!).

Mathieu owns an excavator and offered Noah to try it, not just once, but TWICE!

You see it coming... Now Noah wants an excavator. It’s so much better than a power saw, and way cooler!

One Saturday, Noah had a business meeting with Mathieu. When he came back home, he started shopping for an excavator on the web. He found one for $52,800. He thought, “OK, but how am I going to get that much money?” (and no, neither his mom nor I will buy it for him!).

He was so happy because he had collected the money he needed for a power saw.

So, he decided to go around collecting empty cans and bottles to save up his money.

I’m telling you, in his mind, it’s happening! He WILL get his excavator!

He even chose a model bigger than Mathieu’s excavator. But since Mathieu’s been so kind with Noah, he’s willing to let him use the bigger one and Noah will use the smallest because, in his own words, “it’s important to reward good deeds” (so cute!). The only outstanding issue is whether or not he can park his excavator on Mathieu’s land, since there isn’t enough room on the family lot.

What have you learned from this story? Share your thoughts by replying to this email 😊

Passionate about entrepreneurship since my childhood, and even more about e-commerce businesses, I like to find the best tools and resources to help fellow entrepreneurs to grow their business exponentially. After years of growing other businesses, I launched a couple of years ago, my own online store, which now ships about fifty parcels every day in more than 75 countries.